By The Numbers: Top Performing 2004s in the USHL

Welcome to the first edition of “By The Numbers”, a regular feature where we deep dive into the advanced stats and see which players are excelling in specific areas of the game in their respective leagues. Compiling micro stats, surface stats, and on-ice stats at 5v5 competition put into per 60 minutes of play rates, we have created visual representations of the data in a clean and thorough format through the use of our player cards.

If you’re unfamiliar with analytics, no need to worry as our cards are set up to be easy to read and understand. All the data is displayed in percentile format and turned into a whole number. For example, if a player has 95 in “scoring”, they are better than 95% of players at scoring, therefore, the higher the number the better.

In this article, we’ll be looking at the top 7 2004-born USHL forwards. As always with advanced analytics, small sample sizes should be taken into consideration.

#7: Cole Knuble, Fargo Force
Slotted as 7th highest overall for 2004 born USHL forwards, Cole Knuble is a dominant transition forward, who has high overalls in all the transition categories. His ability to carry the puck through traffic to gain the zone and break the puck out is a huge asset to any team to maximize efficiency. Knuble also puts himself in positions to succeed offensively, generating high danger scoring chances and delivering dangerous shots on goal. All this put together gives Knuble a 92 overall. 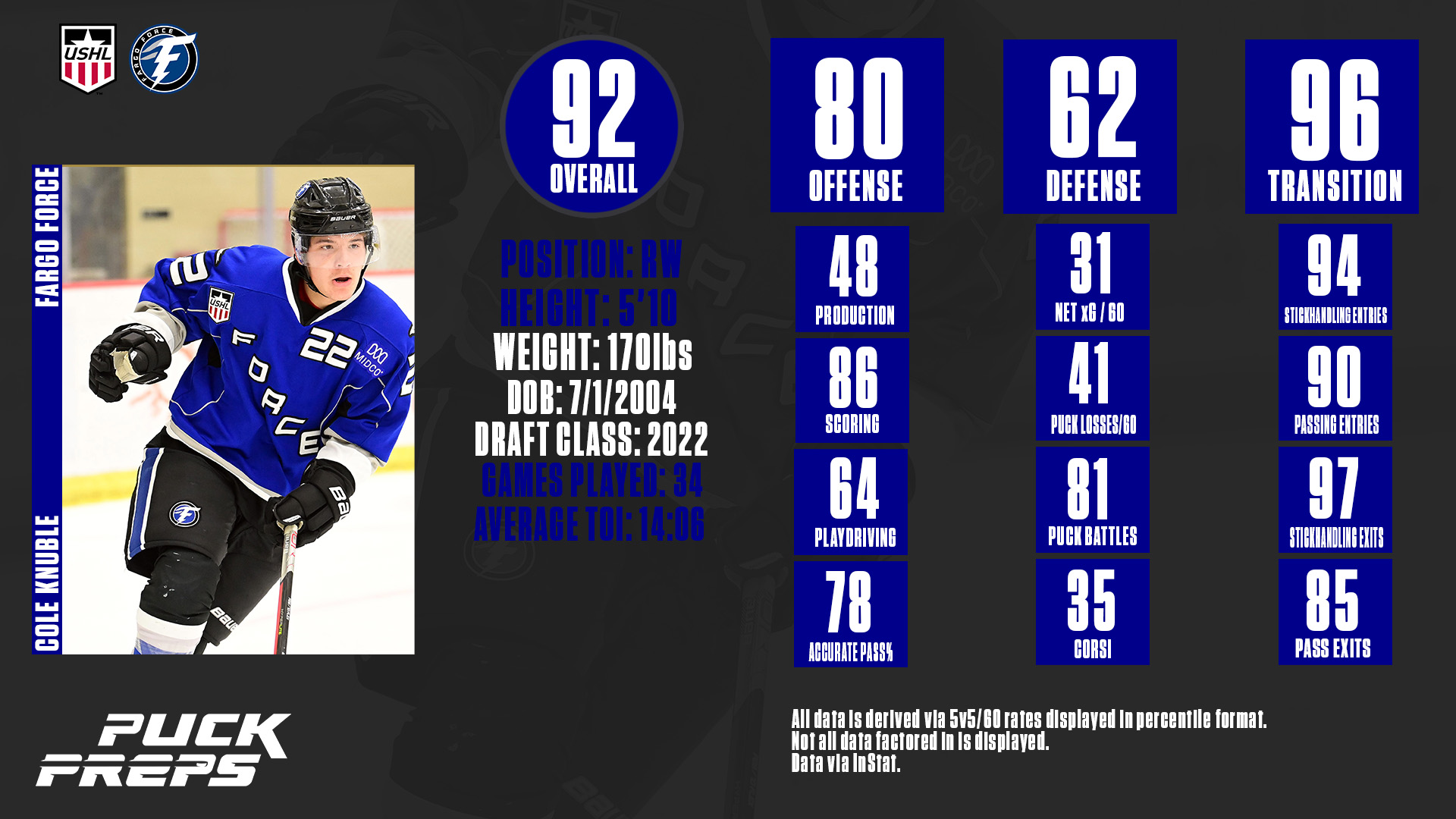 #6 Cameron Lund, Green Bay Gamblers
Next up is Cameron Lund, center for the Green Bay Gamblers. Lund is a player who has really improved throughout the year and his underlying numbers prove it. An excellent play-driving centerman who has a strong goal-scoring game to compliment it, Lund uses his offensive skill set to drive play and leave an offensive impact regularly. Excellent in transition when the puck is on his stick, Lund is a strong transition player as well, making him extra valuable in all 3 zones of the ice. Lund’s growth and development this year have him ranked in the early-to-middle rounds of the 2022 NHL Draft, sitting at a 93 overall. #5 Jimmy Snuggerud, USNTDP U18
The first NTDP U18 player on the list is Jimmy Snuggerud, an offensive dynamo in underlying analytics. Across the board he makes an impact offensively, his production and scoring abilities are amongst the best in the USHL and his play driving doesn’t lag far behind either. His relenting offensive zone impact helps his team continually pressure the opposition, giving him great puck possession numbers. Overall, Snuggerud is a well-developed player whose offensive game is elite, and his transition and defensive metrics aren’t too bad either, settling him at a 95 overall. 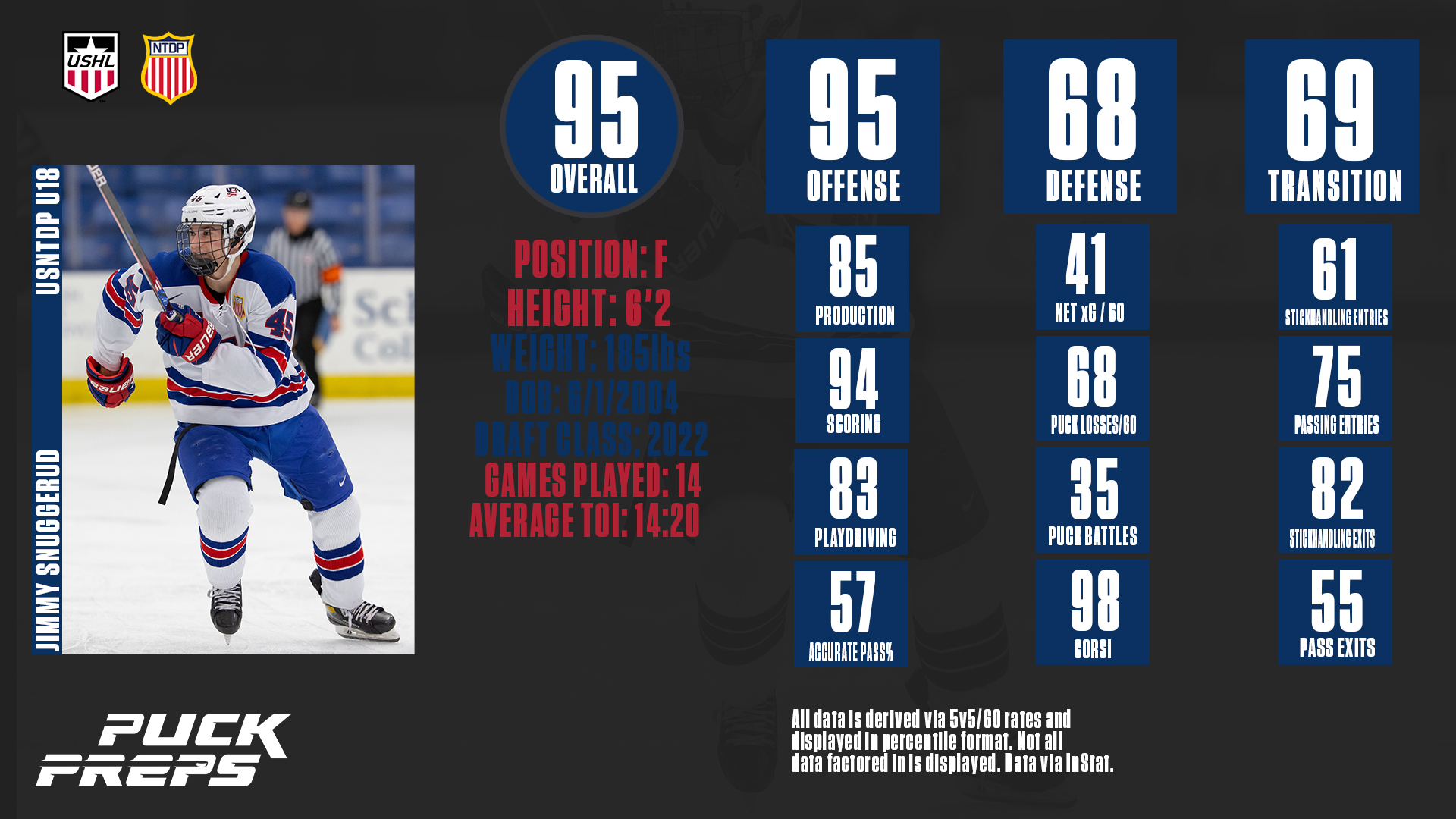 #4: Logan Cooley, USNTDP U18
Viewed as one of the best players eligible for the 2022 NHL Draft, Logan Cooley has the stats to back up such acclaim. His all-around game is spectacular, having an 86 in offense, a 94 in defense, and a 92 in transition, it is without question why he is demanding such a high draft spot this summer. One of the best play drivers and transition players in the USHL, whilst remaining defensively responsible, it’s hard to argue Cooley isn’t one of the best players in the draft class and age group. When the puck is on Cooley’s stick in any area of the ice, he can be trusted to do the right thing and have a positive impact on his team, for this, Cooley is at a 95 overall. 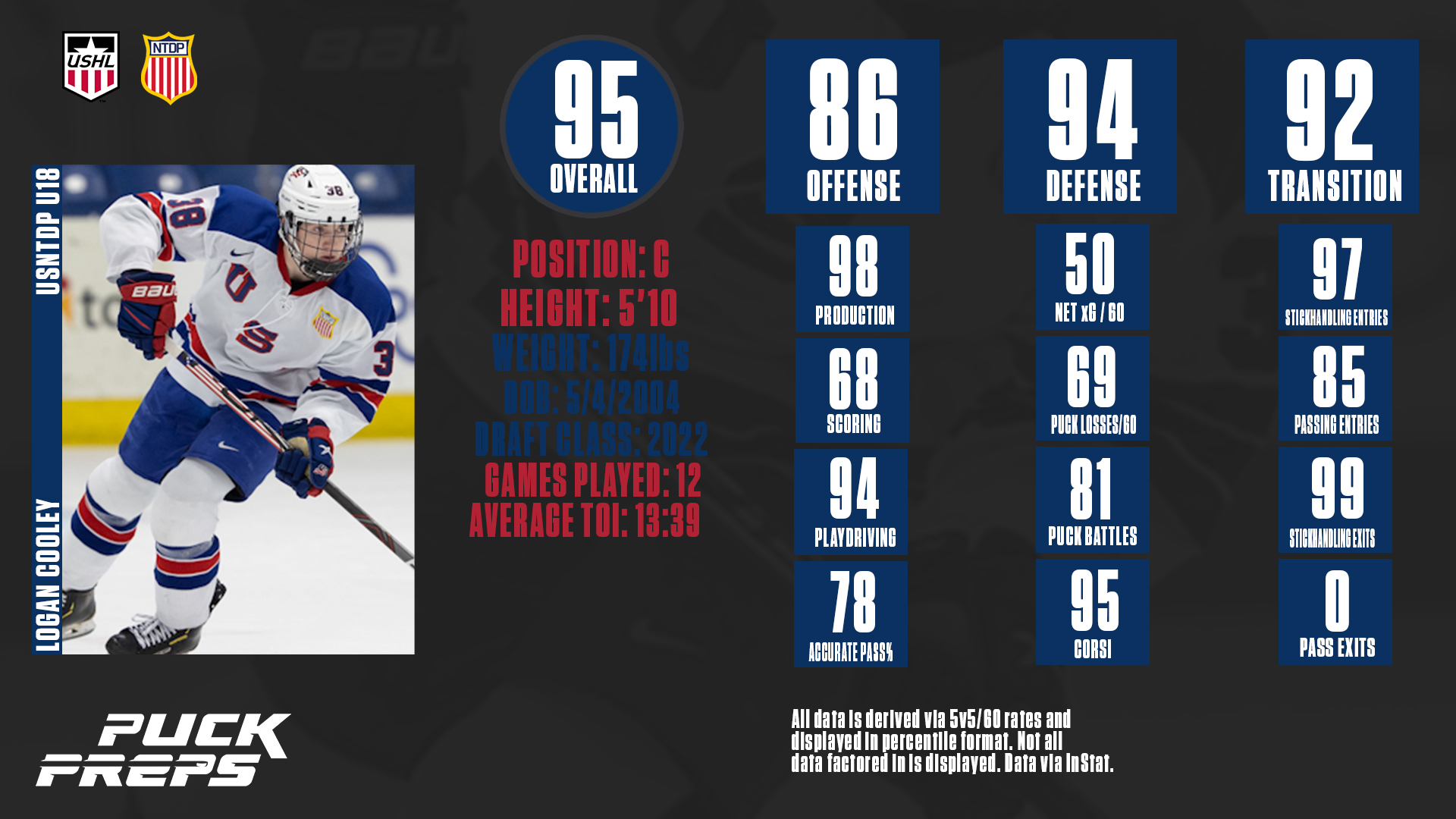 #3: Cutter Gauthier, USNTDP U18
Cracking the top 3 of our top 7 2004 born USHL skaters is Cutter Gauthier, a dynamic power forward with excellent goal-scoring capabilities. Gauthier stands at 6’3 and has a powerful shot that he is able to get off in high danger areas of the ice on a regular basis. His size and strength give him an advantage when shielding and protecting the puck, very rarely losing possession. Defensively, Gauthier is also one of the best, giving his team that shutdown ability when he’s on the ice. He can be trusted defensively to make the right play with the puck and shut down the opposition. Gauthier sits at a 97 overall. 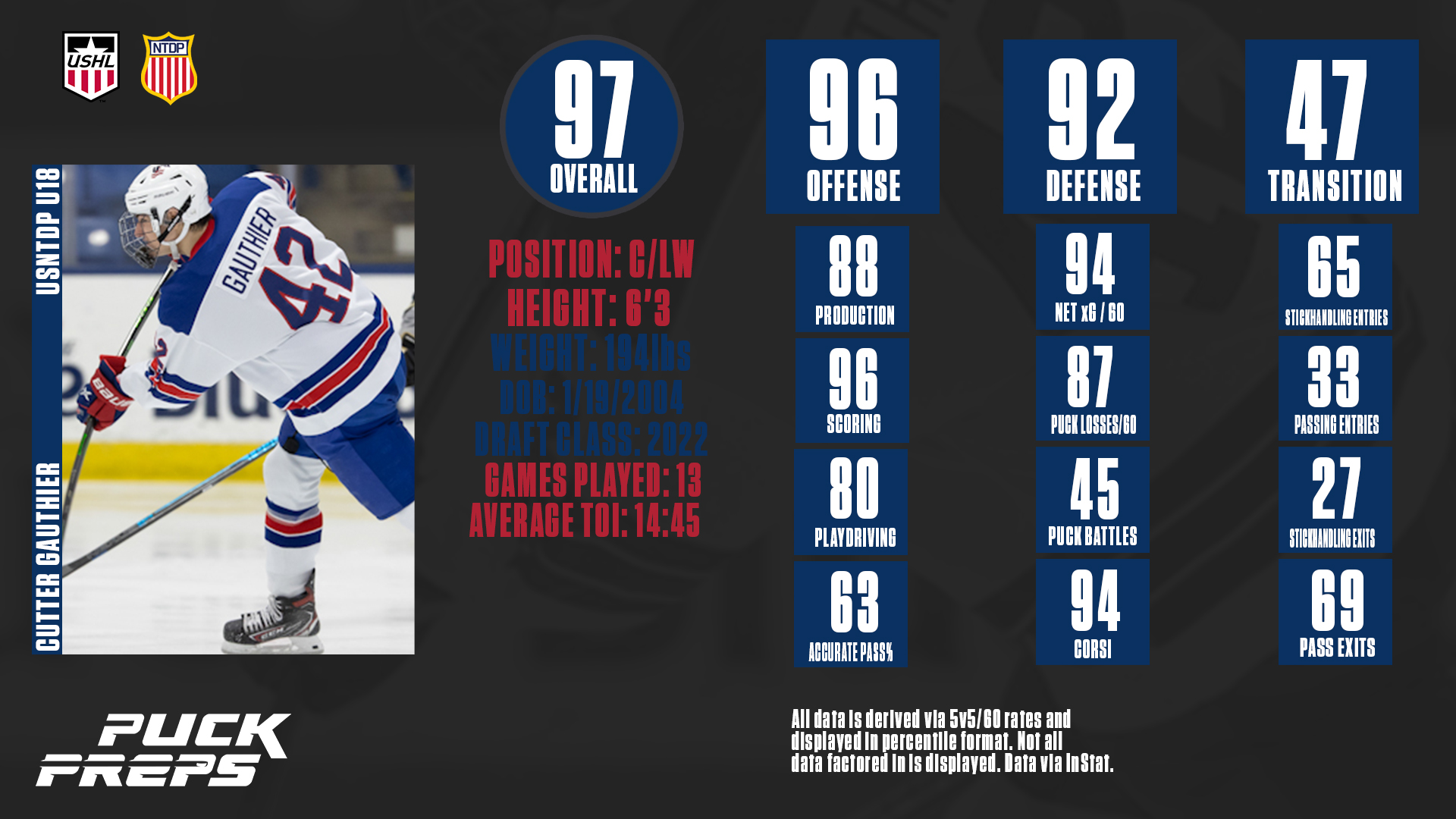 #2: Adam Fantilli, Chicago Steel
One of the older 2023 NHL Draft eligible players, Adam Fantilli is our 2nd highest 2004 born USHL forward. Fantilli’s offensive game is off the charts, an amazing goal scorer and finisher, Fantilli’s size and shooting ability make him one of the very best there is in the USHL, and in his draft class. His vision and puck skills place him as one of the best play drivers in the USHL, combine these two traotss and he has an impressive offensive rating of 98. In addition to his offensive game, Fantilli’s strong skating makes him one of the better players in transition when it comes to gaining zone entries with possession. Watching Fantilli play its no secret he’s a special player, and his overall score reflects that at 98. 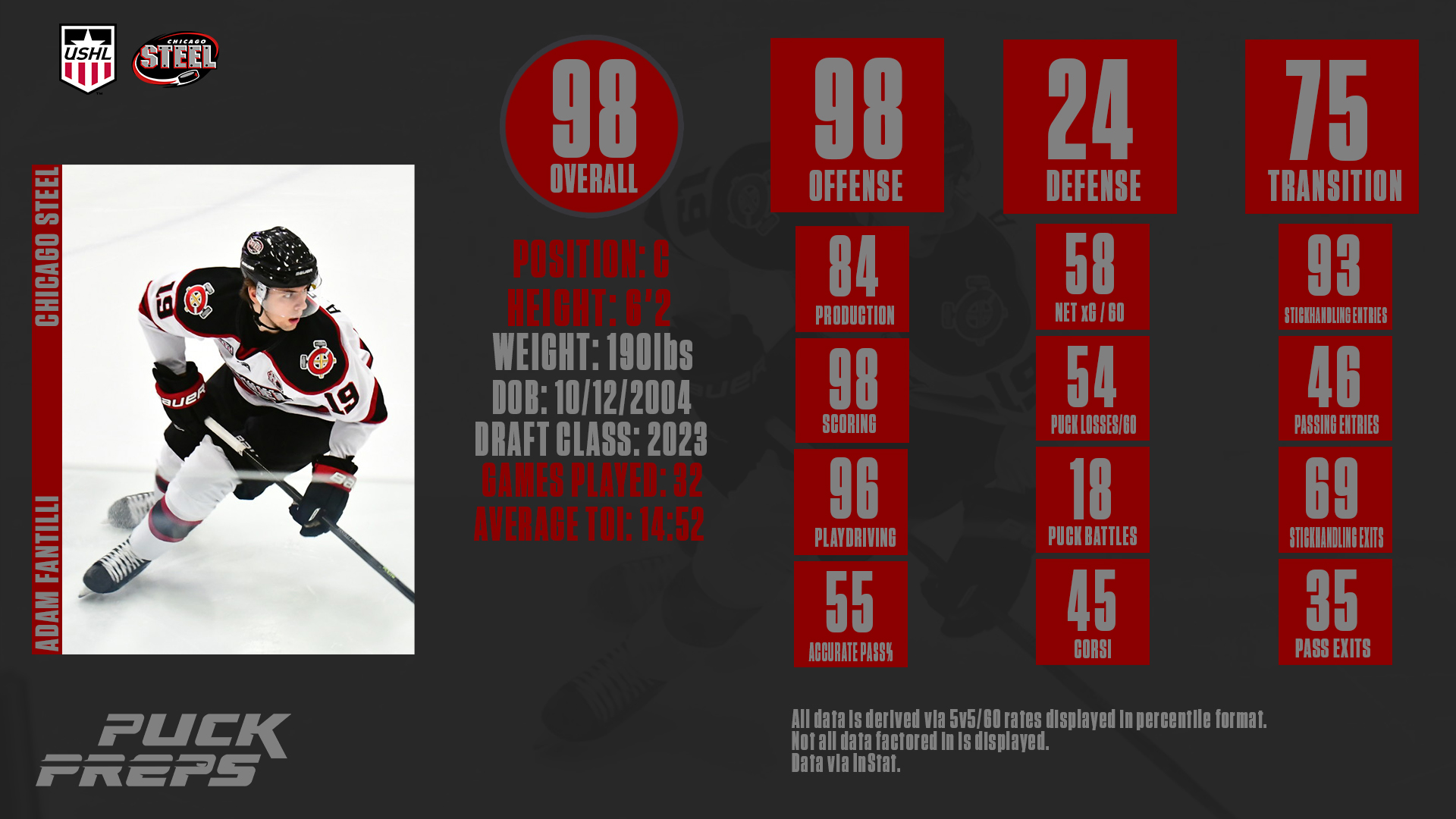 #1: Frank Nazar, USNTDP U18
Atop our list is the speedy, goal-scoring Frank Nazar. Nazar’s offensive scores are unbelievable with every stat, with the exception of accurate passing, being above a 97 or higher. Watching Nazar play, he’s a dynamic forward with soft hands and a bullet of a shot, no surprise he is one of the very best offensive players in the USHL. Defensively reliable and good in transition, it only further adds to Nazar’s value and game, seen as a projected first-round pick in the 2022 NHL Draft. Nazar’s play may justify him in a top-10 spot as he sits as our best overall player in the USHL with a 100 overall rating. 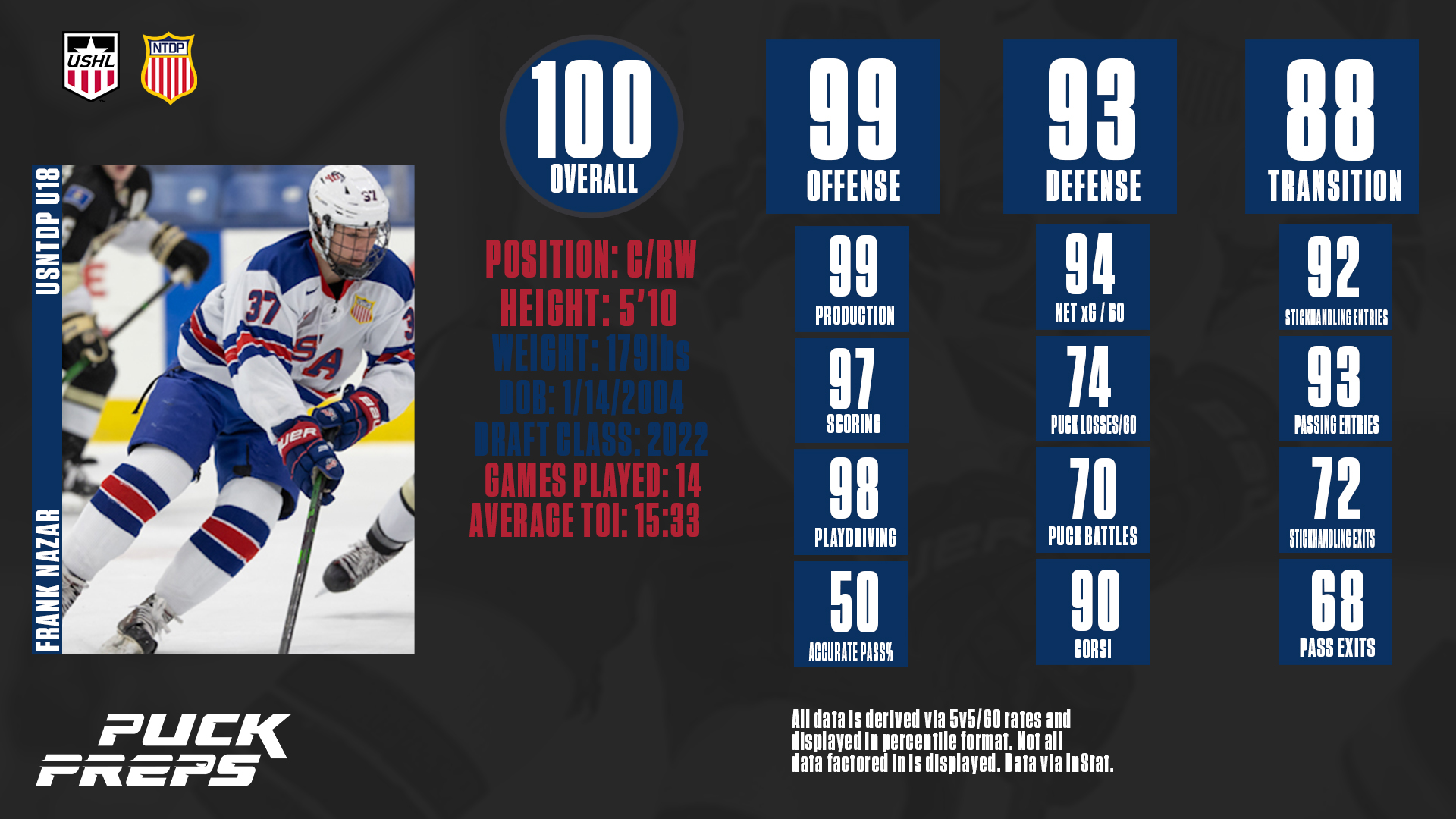